My Christmas Miracle by Susan Ricci

I would like to introduce you to Susan Ricci. Susan and her husband Joe live in a  New Jersey town near the sea. Together they have seven children and nine grandchildren. Susan is an award-winning, internationally read, From Women’s Pens, author and humorist. I met Susan on Twitter and I follow her on Facebook. I know you will enjoy her story and while you’re at it you should check out her books if you enjoy romance.

At the risk of sounding melancholy, marvelous Christmas memories are either constant from birth, arrive late in life, or perhaps not at all. I eventually became one of the lucky ones, but the truth is, I doubted a Christmas marvel would ever happen to me. Although I was determined to ensure happy holidays for the sake of my children over three decades, I’d felt bereft of personally experiencing those Christmas magical wonders we all grew up believing. That is, until five years ago… My grown children were shocked I’d even consider remarrying that Christmas in 2010, when Joe and I became engaged. Joe had asked me to marry him earlier Christmas morning, on bended knee no less. I was honored and quite flustered as a young bride-to-be, when I accepted him as my future husband. Later, Joe, my family, and me were all sitting at the dining room table enjoying Christmas dinner. Suddenly, my youngest daughter saw the beautiful aquamarine and diamond ring on the appropriate finger and yelled, “Mommy’s wearing a ring!” My oldest cried, “Oh my God!” and my only son simply looked dazed. Not quite the reaction I was hoping for, but in truth, I wasn’t surprised. My marital past had been fraught with failure. I’d divorced my children’s father after twenty-five years of miscommunication and abuse, and immediately hopped aboard the relationship train with my Jewish boss. Both of us had been friends for many years, and thought by changing that friendship into a romantic connection, we’d soon find the happiness that eluded us in our former marriages. We tied the knot five years later. Because of his religious beliefs, my second husband didn’t celebrate Christmas. Oh, he gave me expensive gifts and told me I’d be allowed to have a Christmas tree and such, but his heart wasn’t in it, and I knew it. Our differences were apparent in other ways as well, and after four short years, the marriage ended. So did my employment at his office. A year later, the Zeppelin, also known as Joe, entered my life and with his arrival came joy, love, and security, and my new best friend. My children did their best to dissuade me from marrying again. My youngest daughter told me, “He’s just marrying you for sex.” “So what?” I’d responded. “How lucky can a gal over half a century old get?” My son thought Joe might be marrying me for my money. “Money?” I laughed. “He’s the one with the money.” And so it went. I even received a text from one of the kids on my wedding day in Hawaii saying, “It’s still not too late.” Needless to say, five happy years later, Joe has been the inspiration for every story that has been ever created by my muse, also known as Cindy Layton. There’s an element of truth in everything I’ve ever published, however slight, and if it wasn’t for my loving husband, I’d probably be a bitter, old hag writing stagnant summaries of prose that have no meaning. What began as a journal, while Joe and I were dating, evolved into the novel Dinosaurs and Cherry Stems. The story earned several prestigious awards for Humor and Romance the past several years, and my husband’s enthusiastic encouragement was key in creating my first published novel. Joe’s love for me is my true Christmas miracle. This year, as we celebrate the holiday season, we do this together under our first roof as man and wife. We’ve sold our previous homes, his and mine, and bought one together. In short, we’ve renovated both the house and our lives. I think that constitutes a pretty decent Christmas Miracle, don’t you? 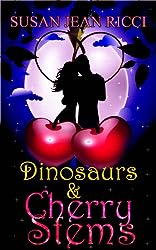 Susan, Theresa, and I are a part of the 2015 Magical Book Giveaway. Follow the link below to register for a chance at winning one of several books and a chance at a $100 grand prize.